As little as 200 years ago, the small clear patches of close-cropped grasses found a new purpose as ostentatious displays of wealth. In the 16th century, English and French castles had chamomile and thyme lawns, and it is not until later, green carpets, or tapis vert, became integrated into gardens such as André Le Nôtre's designs at Versailles. While the suburb, mechanical lawnmower, and the 40-hour work week changed the old-fashioned elite concept of landscape, a fine carpet of green grass is considered a moral imperative even though the expanses of green make little ecological sense. More and more people of arid west abandoning grass with gusto. With the growing consideration of water-saving landscape alternatives, the most prominent grass-ostentatious tournaments, Wimbledon, is considering a controversial move to an artificial playing surface.

Did you know that the Wimbledon's grass courts require none tons of seed each year? To maintain Centre Court, around 51 millions grass plans are needed. Wimbledon's grass is cut by one millimeter a week from 13mm winter height to the 8mm four weeks before each tournament and kept at this level every morning of the championship. The day after each championship, the lawn caretakers team remakes every court from scratch. They spend an entire year preparing the grass for its two weeks of abuse. With only one chance each tournament to get it right, it's a pure pressure to look after 54 m individual grass plants for Centre Court alone. Each court must have the same hardness and ball-bounce, and this highly depends on the variety of grass on the identical soil.

Neil Stubley, the head Wimbledon groundsman says: "It's like holding the baton for distinguished predecessors and I feel every single day that I mustn't let them down."

Early Wimbledon grass was a mix of native species, planted on top of the firm soil and trimmed by a horse dragging a small mower. In 1921, the groundskeepers started bringing turf strips from a seaside town 350 miles north. Later, the team started the grass nurseries, heaves for the perfect greens.

In 1951, the Sports Turf Research Institute in Bingley, England took over the development of grass courts. Besides testing pesticides and herbicides to kill worms and daises, new soil mixes to change the ground firmness, and fertilizes to control grass; the team builds a "fake foot" with tennis shoe machine that would stomp, slide and smear across the surface. The Wimbledon's ryegrass with short, fine, dense blades and a firm root bed won over "Limousine," "Bingo," "Jupiter," "Barlindo," "Brightstar," "Rambo," hundreds of different types of seed brought in by plant breeders. While players train for years to hit on the Wimbledon tournaments, a vast science machine churns around them, quietly working to make sure that the grass stays firm, smooth, and consistent. 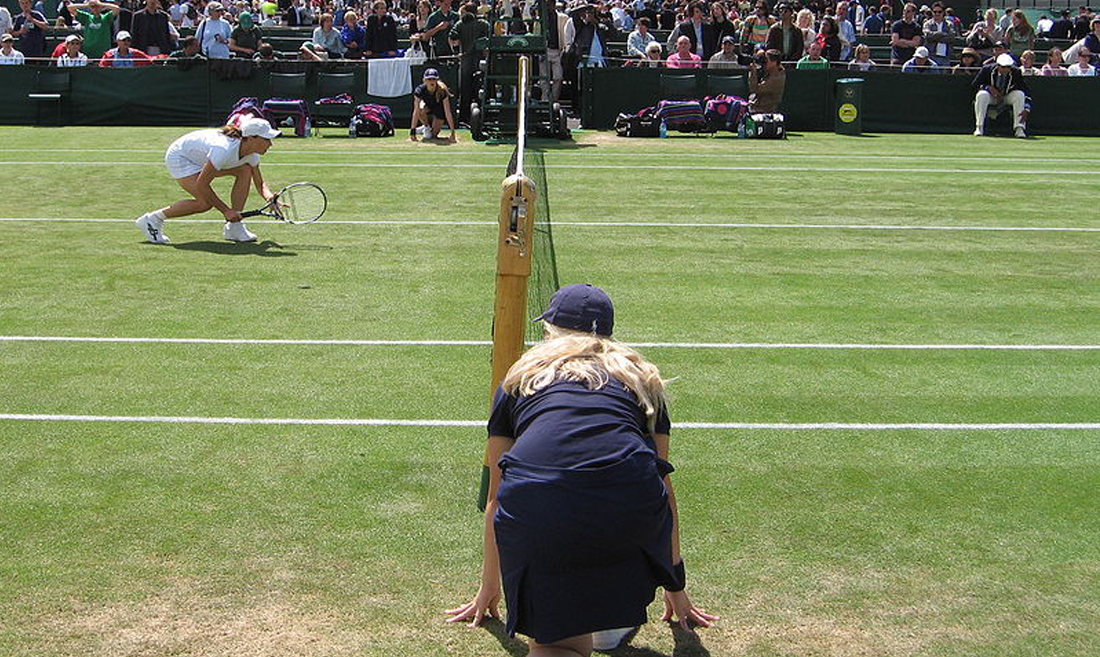 Tennis courts are deceptively complex structures. Their surfaces range from acrylic hard courts, clay and grass. It seems counterintuitive that grass makes for faster-moving tennis ball than clay or concrete surfaces, yet, the Wimbledon's fast magic has been spoken for decades. The speeds are estimated to average 45 miles per hour, 15-20 percent faster than on clay, the slowest type of court in tennis. On hard surfaces, the speed is lost to friction. Grass courts are relatively soft, but the grass blades cause balls to bounce lower and more horizontally. The soft ground creates a slight skidding motion, giving the ball a little kick. For players, the quality of the court surface is crucial. Each presents different challenges with limited time to adapt. Some players, like Rafael Nadal, are kings of clays; others, like Roger Federer, are titans on the turf. The Wimbledon courts are recognized as the best in the world, but that doesn't stop athletes from complaining.

Roger Federer says the courts were slippery and less than perfect. Andy Murray claimed that the Centre Court had visible divots and lacking. Novak Djokovic, the Serbian tennis player, ranked world No. 10 in men's singles tennis, agreed that he "hasn't had that kind of experience before in Wimbledon."

Simona Halep, a Romanian word No. 1 of the WTA tour as in 2018, described court conditions as dangerous.

"That's grass," most agreed. The grass is a living, breathing surface. It can be tricky and prone to changes. The hot spell of weather can be an answer, but it doesn't delude the nightmares for Stubley. When the temperature rises, “The plant (perennial ryegrass) starts to stress out and shut down to conserve itself. Last year, the courts played well, but looked bad," he said. It might be possible to manipulate the plant to an extent, but the mother nature always has the final say.

Some players find the grass court unpredictability frustratingly exciting. "You're tiptoeing a little more on grass than you are on clay or concrete. You have to accept that that's the way it is," said John McEnroe, a three-time Wimbledon winner. Others feel uncomfortable, unsettled and anxious.

Meanwhile, the Wimbledon's committee is investing in research of putting artificial grass surfaces at Centre Court. London venue lends "lawn tennis" a certain prestige, but it handicapped by the perennial ryegrass wearing out under demands of a two-week event. To equal men's and women's games, the surface change might be necessary.

"We're getting close to the stage where we put down a hybrid grass court in one of the practice courts," said Henman, the former world No. 4, "We know what 100 percent artificial is, and it's not great, but we're looking at three, five, ten. How will it be underfoot? What will the movement be like?"

One of the Wimbledon's considerations includes a hybrid surface, a mixture of plants and plastic pitches.

The patented technology belongs to Greenfields, and SIS pitches first appeared in the 1990x.

The Fibresand hybrid surface method is to mix fibers and sand in an automated plant and install it on the pitch. Another technology is to place a mat with woven and tufted fibers on the surface, brush it in sand or its mixes and seed grass mixtures.

There is also a technology to implant grass fibers in the sand with a tufting machine. Plastic pieces of grass will be injected in the grass courts about 19 inches into the soil, and these will act as the foundation upon which the new surfaces will be grown. Natural grassroots then bind around these to create a stronger surface, allowing more matches to be played because there are less wear and tear. Similar technology is used in six of twelve World Football Cup stadium with about three percent of synthetic grass. Wimbledon plans to experiment with five to ten percent. 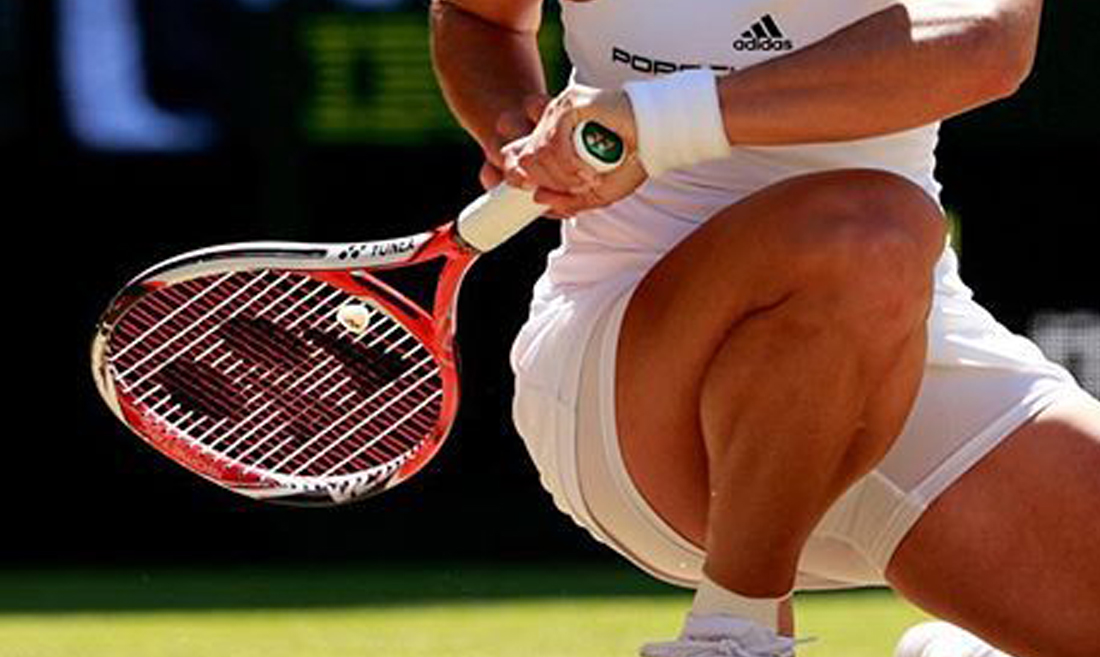 The Wimbledon's grass resumes its place in the collective psyche as familiar green fades to dirty brown as the tournament pounds towards its conclusion. Everyone likes to see the courts look the same on the final Sunday as they do on the opening Monday. It's still about tennis, players, and matches.

On Monday, August 29, 2016, Gov. Jerry Brown signed new Hill's Senate Bill 814, that allows water suppliers to use extreme measures to prevent waste and unreasonable use of water in California during one of the most severe droughts documented in the last century. Existing law states that a violation of water conservation program can be punished by "imprisonment in a county jail for not more than 30 days, or by a fine not exceeding $1,000, or both."